Other Books By The Same Author 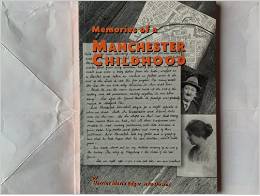 Memories of a Manchester Childhood

These are the childhood memories of Harriet Maria Edgar, née Downs, born in 1894 at 76 Chester Road, Hulme, Manchester.   Her father Walter Downs was a butcher, and Harriet describes how she helped in the shop, cutting up meat and counting the takings, from the age of five.

Hulme and its slum houses, its streets and characters, its shops and prices, its numerous ale-houses and its drunks, its horse-drawn carts and its trams, is graphically re-created – the children’s street games, the overcrowded bedrooms, and the lavatory in the backyard, where human waste accumulated until the weekly visit of the malodorous municipal cart.

Here are the back-to-back tenements, where the twisting stairs were too narrow for a coffin – so any sick member of the family in the first-floor bedroom was ominously “brought down” to the ground floor, just in case.   At school, all the classes were in one room, as was the headmistress’s desk.   Each class chanted tables and spellings and disturbed its neighbours, while on a hot day the girls perspired under perhaps seven or eight layers of clothes, some of them infrequently washed.   Theatres hosted rousing melodramas, with the climactic scenes remembered for years.

Harriet’s grandma was the neighbourhood moneylender, who supplied her clients with the loan of a shilling until the end of the week, for “only” a penny interest; since grandma was illiterate, Harriet had to act as her secretary for negotiations with the borrowers and her go-between for her bank deposits.  Many of the neighbours were also illiterate, so Harriet was regularly called upon to read any correspondence, and to write replies.

Altogether these memories make a fascinating picture of life in a poor district of Manchester at the end of the Victorian age.

Harriet’s reminiscences, written down at odd times over years, have been collated and edited by her son, Alwyn Edgar.

More information on the book (including how to buy a copy) is available at the dedicated website for this book at Manchesterhistory.co.uk

Paperback copies are available at a price of just £10, with free post and packing.